It’s UW-Madison Commencement Day, 1965. Badgers stand proud in their graduation garb, eager to receive diplomas. Among them, one woman stands out in her gown and nun’s habit: Sister Mary Kenneth Keller, the first person in the US to earn a PhD in computer science.*

Keller was a trailblazer in higher education. She worked tirelessly to expand the reach of computer science. She was a founder of the Association of Small Computer Users in Education (ASCUE), an organization still active today that furthers the use of technology in education. She recognized the massive potential of the computer as an instructive tool.

Keller was born on December 17, 1913 in Cleveland, Ohio. At the age of eighteen, she joined a Roman Catholic order, the Sisters of Charity of the Blessed Virgin Mary, in 1932. In 1940 she professed her vows with the order.

She earned her B.S. in Mathematics and M.S. in Mathematics and Physics from DePaul University, and she participated in a summer institute at Dartmouth University in the late 1950s. John Kemeny, Dartmouth’s mathematics department chair, explained, “Our vision was that every student on campus should have access to a computer, and any faculty member should be able to use a computer in the classroom whenever appropriate. It was as simple as that.” Keller shared this vision in her career as well.

After her work at Dartmouth, Keller came to UW-Madison to earn her PhD. Professor Preston Hammer oversaw her thesis titled “Inductive Inference on Computer Generated Patterns,”  in which she explored generalizations that can be made from analyzing patterns of change in computer generated expressions. 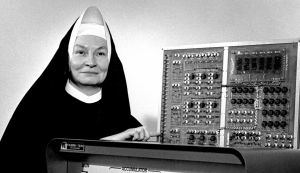 After graduating from UW, Keller founded the computer science department at Clarke University in Iowa. She taught in and then directed the department, one of the first at a small institution, for eighteen years. The Keller Computer Center and Information Services and Mary Kenneth Keller Computer Science Scholarship both honor her impressive legacy at Clarke.

Sister Mary Kenneth Keller strived for equal access to computing for everyone; her alma mater the University of Wisconsin-Madison seeks this as well. Keller’s impact both in and beyond the classroom mirrors the recently developed Wisconsin Computing Idea.

Created in January of 2018 by a twelve-person working group on computing appointed by the Chancellor, the Wisconsin Computing Idea holds “that computing is critical to our university and the state, that UW-Madison will take decisive and bold actions to lead the computing revolution, and that advances in computing on this campus will benefit all corners of this great state.”

Sister Mary Kenneth Keller’s work embodies the Wisconsin Computing Idea in both its generosity and considerable reach. Her words are as applicable today as they were in the 1960s: “We’re having an information explosion . . . , and it’s certainly obvious that information is of no use unless it’s available.”

* Another PhD in computer science was awarded on this day by Washington University- St. Louis.