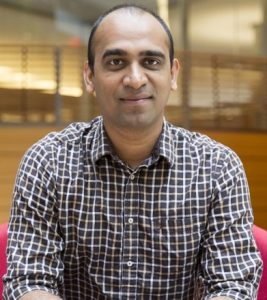 Professor Mohit Gupta and colleagues at the Wisconsin Computational Imaging and Vision Lab (WISIONLab) at UW-Madison have been awarded an additional year of funding by the Sony Research Award Program (SRAP) for their research project “Single Photon Imaging”.

Dr. Makiko Kan, General Manager at Sony’s R&D  Laboratory, said that Gupta and colleagues’ “outstanding performance in the first year has been recognized” with an additional year of funding. Their “research proposes a new imaging paradigm based on the emerging technology of single-photon image sensors and machine learning algorithms, which allows Sony to imagine the next generation of imaging applications – across computer vision, robotics, navigation, and consumer and scientific photography,” Kan said.

“In terms of the research direction itself, in the first year of the program, the emphasis was on exploring the scientific potential of single-photon imaging,” said Gupta. “We achieved encouraging results that were supported by SONY, including publications in top-tier computer vision venues (e.g., see this link).”

Gupta and his colleagues are working on technology to allow good image quality in low-light environments and those with large ranges of light. The result of their research so far “is good image quality in low-light, with reduced motion blur, as well as a wide dynamic range,” says Gupta.“We have had good results even when the brightest spot in view is getting 100,000 times as much light as the darkest.”

Going forward, the group plans to research whether single-photon cameras’ exciting capabilities can be used for more mainstream applications, including consumer photography and computer vision. “The ability to see reliably even when there is not sufficient light can enable a considerably broader set of applications. Imagine an autonomous car driving in extreme dark looking to avoid obstacles or an industrial robot performing high-speed maneuvers while assembling a complex machine part,” Gupta said.

Mohit Gupta is an assistant professor in the Computer Sciences Department at the University of Wisconsin-Madison. He earned his PhD at the Robotics Institute at Carnegie Mellon University. He has received an NSF Career Award, the Marr Prize, and a Sony Faculty Innovation Award.