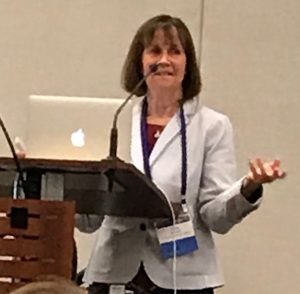 Madison, WI, July 1, 2019 – ACM SIGMETRICS announced the selection of Prof. Mary Vernon of University of Wisconsin–Madison as the recipient of the 2019 ACM SIGMETRICS Achievement Award in recognition of her fundamental contributions to analytic performance modeling techniques and to analytic design of a wide range of impactful computer and communication system architectures.

A key lesson from these studies is that analytic models that predict measured system performance typically require 1/10th – 1/100th, or less, of the development time for detailed state-of-the-art system simulators, and frequently uncover significant, previously unknown errors in a complex system (or simulator) implementation. Hence such models are also highly valuable for validating system (and simulator) implementations.

Along with her body of work on analytic modeling and quantitative system design, Vernon has pioneered the development of new, more insightful and higher-fidelity characterizations of production high-performance parallel system workloads, streaming media server workloads, and network traffic, as well as the development of key new insights into Internet security.

Dr. Vernon’s contributions are documented in two US patents for bus arbitration protocols, four US patents for scalable streaming protocols and content delivery architectures, and over 90 technical papers, including seven award papers – most recently in Sigcomm 2001, Infocom 2004, and the 2005 USENIX Security Symposium. Her analytic techniques and design results have been reprinted in selective compilations for system architects, adopted in commercial systems and standards, and used by academic colleagues as well as by many leading companies in the U.S. and overseas. Her work has also been recognized by the NSF Presidential Young Investigator Award, the NSF Faculty Award for Women in Science and Engineering, the ACM Fellow award, and a UW-Madison Vilas Associate award, and the UW-Madison Kellett Award, as well as by invited Keynote talks at conferences in the US, Germany and Spain, Distinguished Lectures at universities throughout the US and Canada, and numerous further invited talks throughout the US, Canada, Europe, Brazil and Japan. She has served on the editorial boards of the IEEE Transactions on Parallel and Distributed Systems and the IEEE Transactions on Software Engineering, on the 1993 NSF Blue Ribbon Panel for High Performance Computing, the NSF CISE Advisory Board, the CRA Board of Directors, the Executive Committee of the National Computational Science Alliance (NCSA), the NRC CSTB Committee on the Internet Under Crisis Conditions: Learning from the Impact of 9/11, external review committees for various engineering colleges and computer science departments, as Chair of the ACM SIGMETRICS, and as Chair of the UW-Madison Computer Sciences Department. Additional information is available on her website: http://pages.cs.wisc.edu/~vernon/.