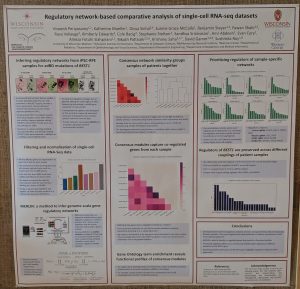 Viswesh Periyasamy presented a poster in May at the Great Lakes Bioinformatics Consortium 2019 Conference (GLBIO) on the topic of gene regulatory network inference. This is a method to recover the interactions and relationships between genes. His research goal, in his own words, “is to better understand how gene mutations responsible for degenerative eye disease can affect the underlying mechanisms in which genes interact with each other.”

Periyasamy’s poster was on his work on regulatory network analysis of single-cell RNA-Sequencing data. According to Periyasamy, “These samples were derived from experiments that used genome editing to study mutations of the BEST1 gene, a gene which is highly linked to the macular degeneration disease adBD (autosomal dominant BEST disease).” He continues, “The overall goal of my project was to do a comparative analysis of these networks to recover a biological hierarchy between mutations and expose regulators which play a key role in the disease.” His work was done in conjunction with the Saha and Gamm lab on campus, for which they have a paper under review in the journal Nature.

Periyasamy graduated with an MS in computer science in May. He is now joining a startup called Confluent in the Bay Area where he’ll be working on big data stream processing.