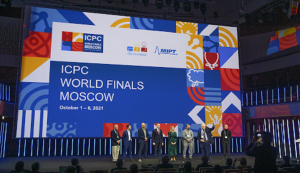 After 18 months full of unprecedented hurdles, the UW-Madison team finished 17th out of 117 teams at the International Collegiate Programming Contest world finals in Moscow. They also ranked fourth out of the 15 North American teams competing. ICPC is the oldest, largest, and most prestigious programming contest in the world, conducted by and for the world’s universities.

The teams who compete at the world finals are the regional champions selected from 300,000 participants internationally, making the competition extremely high level. This year’s UW-Madison team was made up of Jirayu Burapacheep, Ziyi Zhang, and Nitit Jongsawatsataporn (substituting for Dung Viet Bui).

This is the 20th year in a row that UW-Madison has participated in the ICPC world finals, a title that no other school in North America can claim. Computer Sciences Professor Dieter van Melkebeek has been the coach for all 20 years.

“Dieter has done much more than coach. He has built an ecosystem for these teams to thrive,” Computer Sciences Professor Somesh Jha said. “It is a staggering amount of effort.”

Travelling to a foreign venue to compete brought multiple challenges that the students overcame with their perseverance.  One challenge the team faced was that they did not obtain a UW-Madison travel authorization due to the COVID-19 pandemic. Instead of giving up, the three students decided to pay for their own travel expenses. They assessed the health risks and took all precautions necessary to ensure the trip was done safely.

Another challenge was that Viet Bui would be unable to return to the US after the competition due to issues with the visa process. Because he had already spent 17 months preparing for the competition, he competed online with two other contestants. Viet Bui graciously agreed to let another competitor take his place in the in-person competition, and Jongsawatsataporn was happy to step in. Substitutions are usually not allowed, but due to the exceptional circumstances this year, Professor van Melkebeek was able to negotiate this unusual move with the ICPC president.

The competition involved competing against other teams to solve 10-15 problems in the course of five hours, Burapacheep said. The problems range from data structure and algorithm design, to math, to logic puzzles.

“The teams are ranked first by the number of problems they solve and then by the speed and correctness they solve the problems with,” Zhang explained.

The team was excited to have the opportunity to compete after all the preparations and difficulties they worked through, and they enjoyed meeting students from across the world who share their interest in competitive programming.

“Finals has always been one of our dreams regarding competitive programming,” Zhang said. “We understand the risk involved with this and are willing to do so as a team.”

“We got a chance to talk to the teams both from the US and the world,” Burapacheep  said. “Some of them we already know from online communities but hadn’t had the chance to meet them in real life .”

Van Melkebeek was extremely proud of the team for being so determined to find a way to compete after facing so many obstacles.

“I’m glad for them that they were able to exhibit their prowess at the world stage after all, having prepared for 18 months (compared to three months in normal years) and having weathered all kinds of additional challenges,” he said. “Thanks to their initiative, we can keep up our unparalleled 20-year record of uninterrupted world finals participation.”

If you are interested in learning more about the UW-Madison ICPC team’s accomplishments, check out the “Hall of Fame” summarizing their accomplishments over the past 20 years.