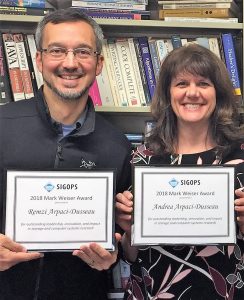 Professors Andrea Arpaci-Dusseau and Remzi Arpaci-Dusseau from the UW-Madison Computer Sciences Department won the 2018 Mark Weiser Award for “outstanding leadership, innovation, and impact in storage and computer systems research.” They are the first professors to win this award from the University of Wisconsin.

Andrea and Remzi, a married couple who work closely together in research and teaching, received this award for their research, mentoring, and educational efforts while working in the CS department, which they joined in January, 2000. In that time, they have written over 120 refereed articles, advised 23 PhD students, and taught thousands about the inner workings of operating systems. Their book Operating Systems: Three Easy Pieces is freely available via the internet, downloaded millions of times each year, and in use at hundreds of institutions around the world.  In Andrea’s words, “We have collaborated with a lot of great students—undergraduate and graduate—at UW-Madison, and the research that this award acknowledges could not have happened without them.”

The Mark Weiser Award was created in 2001 by ACM SIGOPS (the Special Interest Group in Operating Systems) “to be given to individuals who have demonstrated creativity and innovation in operating systems research.” Recipients are chosen based on “contributions that are highly creative, innovative, and possibly high-risk, in keeping with the visionary spirit of Mark Weiser.” Previous recipients include MIT professors Frans Kaashoek, Robert Morris, and Nickolai Zeldovich, Stanford professors Mendel Rosenblum (founder of VMware) and Dawson Engler (founder of Coverity), MacArthur “genius” and UCSD Professor Stefan Savage, and Google Senior Fellows Jeff Dean and Sanjay Ghemawat.

The following (anonymous) quotes from various luminaries in the field were made in support of their nomination. One researcher wrote, “Quite often, the community reaction to their papers is the best compliment we can give a colleague: Wow, I wish I had thought of that.” Another commented, “I think it’s fair to say that they have dominated this important area of systems research for a long time and across many dimensions: novel and impactful ideas, award papers, stellar students.”  And a third researcher wrote, “Without question this recognition of their accomplishments is well deserved and long overdue.”