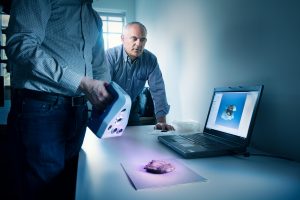 UW alum Brent Seales, Director of the Center for Visualization & Virtual Environments at the University of Kentucky, is featured in the article “Buried by the Ash of Vesuvius, These Scrolls Are Being Read for the First Time in Millennia” on Smithsonian.com. “I’m continuing to work toward access to materials, as well as technical methods that will allow me to read the Herculaneum scrolls, which I consider to be a fantastic ‘grand challenge’ problem,” says Seales.

From the Smithsonian article:

The scrolls represent the only intact library known from the classical world, an unprecedented cache of ancient knowledge. Most classical texts we know today were copied, and were therefore filtered and distorted, by scribes over centuries, but these works came straight from the hands of the Greek and Roman scholars themselves. Yet the tremendous volcanic heat and gases spewed by Vesuvius carbonized the scrolls, turning them black and hard like lumps of coal. Over the years, various attempts to open some of them created a mess of fragile flakes that yielded only brief snippets of text. Hundreds of the papyri were therefore left unopened, with no realistic prospect that their contents would ever be revealed. And it probably would have remained that way except for an American computer scientist named Brent Seales, director of the Center for Visualization & Virtual Environments at the University of Kentucky.

For Seales, viewing them was an “almost otherworldly” experience, he says. “I realized that there were many dozens, probably hundreds, of these intact scrolls, and nobody had the first idea about what the text might be. We were looking at manuscripts that represent the biggest mysteries that I can imagine.”

Read more about it at Smithsonian.com: https://www.smithsonianmag.com/history/buried-ash-vesuvius-scrolls-are-being-read-new-xray-technique-180969358/