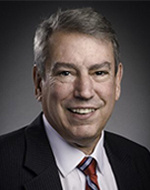 Tom Still is president of the Wisconsin Technology Council, which is the science and technology policy adviser to the Wisconsin governor and Legislature. He is a former newspaper editor, special projects coordinator and reporter who continues to write about business, technology and public policy in Wisconsin. He has served on many public boards and commissions over time, with the current list including the UW System Business Council, the advisory board for the UW-Madison College of Engineering, and the WiSys Technology Foundation Board of Trustees, as well as the CS Board of Visitors. Tom won Madison Magazine’s Best of Madison Business award in 2010 and was named to InBusiness magazine’s 2010 Executive Hall of Fame. He was named “Communicator of the Year” by the Public Relations Society of America/Wisconsin in 2012.

Why I love CS: Computer science intersects with almost every avenue of life in Wisconsin and is essential to making the state’s economy more diverse and stronger.