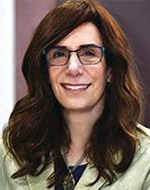 Judy Faulkner is CEO and founder of Epic, which she began in 1979 in the basement of an apartment house with $70,000 in start-up money and two half-time assistants.  Epic has grown by its bootstraps, without venture capital or going public.

Judy received honorary doctorates from the University of Wisconsin-Madison and from Mount Sinai in New York, an M.S. in computer sciences from the UW, and a BS in mathematics from Dickinson College.  After teaching computer science for several years, she then worked as a software developer, creating one of the first databases organized around the patient.

Judy currently serves on the UW-Madison Computer Sciences Board of Visitors, is a member of the National Academy of Medicine’s Leadership Roundtable and of the Aspen Health Strategy Group.  She has pledged that 99% of her assets will go to philanthropy.