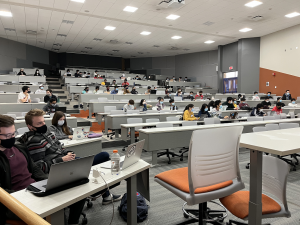 One hundred and three participants competed in the first ever UW-Madison Datathon on October 16 and 17, hosted by the UW-Madison Data Science Club. In addition to the hackathon, the event included multiple speaker series where students were able to hear from event sponsors about the application of data to various career fields

“Since this is our very first Datathon, we had to figure out a lot of things, from the grading rubric to sponsor finances, but we were very excited to host the Datathon for the first time this semester and are glad it turned out well,” said Hailey Jin Park, Data Science Club Vice President.

The Datathon was presented by Corveta and co-sponsored by Epic, American Family Insurance, John Deere, Thomson Reuters, and Google Cloud. 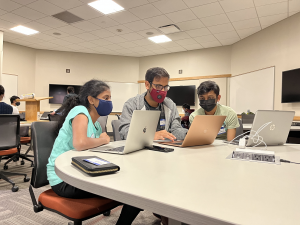 Representatives from each company spoke about how data can be tied into their specific industry, and some also discussed upcoming employment opportunities for students.

Google Cloud also offered students free cloud credit to use during the Hackathon and presented prizes to those who best incorporated Google Cloud technology.

Participants in the hackathon were given 24 hours to complete their projects, which were judged by a panel of four UW faculty members and four sponsor company representatives.

Data Science Club President Gautam Agarwal hopes that participants will continue to work on projects they created during the hackathon and is looking forward to another Datathon event in 2022. “The datathon was a great opportunity for students to build a project, connect with the recruiters, and demonstrate their passion for being involved with Data,” he said. “Through this competition, we hope to have positively promoted Data Science as a career among UW students.”